Making sense of all that complicated photo jargon, Part 3!

Now that you’ve got a handle on shutter speeds and apertures, I’ll move on to the third side of the exposure triangle—ISO or film speed.

ISO stands for the International Standards Organization, which replaced our American Standards Association (remember when America had it’s own standards and our film speed was in ASA?), in order to make all things technical, consistent around the world. I guess the ISO is a kind of United Nations for all the anal-techno-geeks seeking conformity in all things man made.

The ISO basics are simple:  in low light you go to a higher ISO value and in bright light you use a lower ISO value if you don’t want to change your shutter speed and aperture.  The common lower ISO’s are 100 or less.  Depending on the digital camera you have a really high ISO ranges from 400 to 800, in a consumer grade camera. In the professional world we use cameras that will create stunning images at 400 ISO and up to 3200 ISO that we don’t use the lower ISO’s much for outside work.

Now that we’re bringing shutter speeds and apertures together a very important aspect to remember is that each whole shutter speed step (eg. 1/30, 1/60, 1/125 etc.) and each whole aperture step (eg. f4.0, f5.6, f8.0 etc.) are equal.  In other words moving from a shutter speed of 1/60 to 1/125 is equal in an exposure change of one-stop. It’s exactly the same exposure change as if you really did change your f-stop from say f5.6 to f8.0 (and in this example either of these changes would allow one-stop less light to reach the film or sensor).  In addition, your whole ISO steps (eg. 100, 200, 400 and so on) are also equal to a one f-stop change in exposure.  See a pattern here? And just to make things more complicated, digital cameras have shutter speeds and f-stops in between the whole numbers.  But it’s all the same—the smaller steps in between are also the same in how they affect your exposure in equivalence to each other.

EXAMPLE ONE: Leaving our ISO at 100, your camera meter says that the proper exposure is: aperture at f8.0 with a shutter speed of 1/250th.  What if you want to stop some fast action, at your son’s football game, so going to a faster shutter speed of 1/500 sec. would help—however, to maintain a proper exposure, since now this faster shutter speed is allowing less light to reach your film/sensor, you must change your f-stop one step, in the opposite direction to get more light, to f5.6 (remember with f-stops, the smaller the number, the bigger the opening of its aperture). As a side effect the larger aperture (f5.6) will isolate your son better because you are creating less depth-of-field at this aperture.

To recap, you went from:  f8.0 @ 1/250 sec. to f5.6 @ 1/500 sec. This maintains the same exposure with a faster shutter speed and less depth-of-field.  You get a two-fer! Now, You’re not just making a proper exposure—you’re making creative decisions that will make the photograph more visually interesting!

EXAMPLE TWO:  The following would apply to situations where the light level stays the same.  Once a proper exposure is set-up; we will use ISO 100, f-stop of f5.6 and shutter speed at 1/125 sec. for this example.

If you change any one of these numbers you must change one of the others by the same amount, but in the opposite direction, to maintain a proper exposure.  If you go to a higher ISO like 200 you must stop down your f-stop to f8.0 and keeping the shutter speed where it was at, 1/125 sec.  OR still at the higher ISO of 200, keeping the f-stop where it was, f5.6, you must go faster on the shutter speed, to 1/250 sec.

If the situation changes and the light level changes, say the sun is setting, so you have less light, now you only have to change one of the variables in the original set-up (any ONE!).

The exposure triangle is really just a way of thinking about how your shutter speed, aperture and ISO are inter-related.  You can check out some examples below. 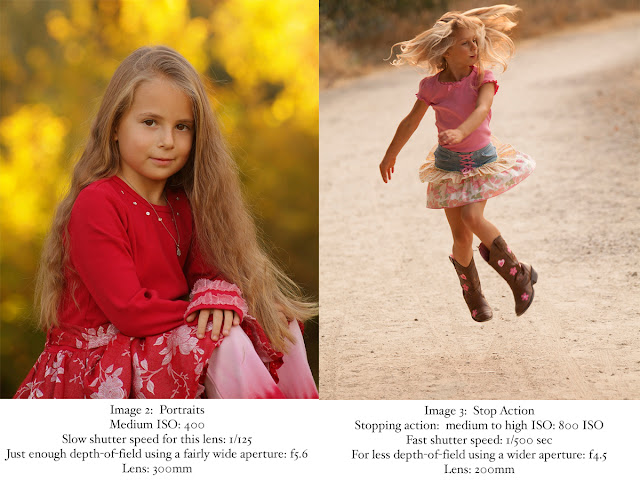 That will wrap it up for now…till next time. Jerry