SENIOR SESSIONS: A BOY AND HIS TOYS !

Austin had recently purchased a big nasty, Suzuki, GSXR, sport bike as his first ever motorcycle, no less, so I wanted to get them photographed together before either of them ended-up in intensive care!  He also wanted to be photographed with his project car, that he turbocharged for drag racing, and his pit bull, so I scheduled a separate session for those.

LESSONS LEARNED FROM AN OLD PRO.:  Don't try to do too much on a given session. Your results will be much better when you focus on ONE photographic goal at a time.

Going out of my comfort zone, due to his schedule, I had to do this session starting at two P.M., which is usually NOT the best time for portraits outside.  Most of my sessions, outside, are usually done one or two hours before sunset. At least I got to choose the location at this local city park that had caught my eye.

Being dead winter the lack of color in the park actually helped to make both him and his bike really stand out. I also really liked the trees with their textures and color that unified the monochromatic setting. 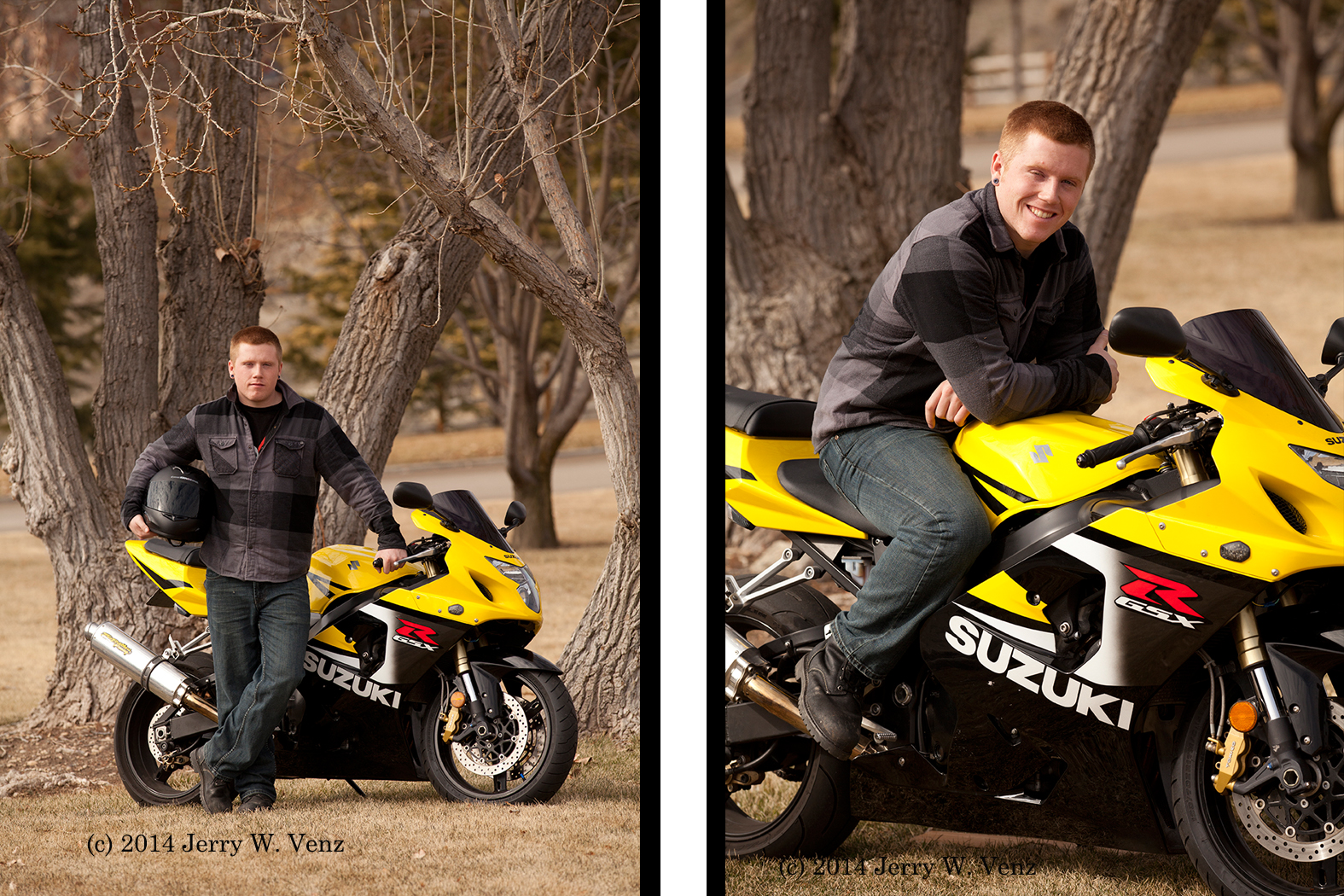 In the spirit of the old saying:   When life gives you lemons….make lemonade!  The following image, using my 15mm fisheye lens, was O.K. but needed more POP so I toyed with the image in ACR boosting the Vibrance, Saturation, and Hue, until I got that dead grass into a yellow range that went well with the yellow of the bike.  This also created the more striking blue in sky making the clouds stand out more.

This is what is so fun about senior sessions--it's O.K….no it's expected that we sometimes go OVER THE TOP! 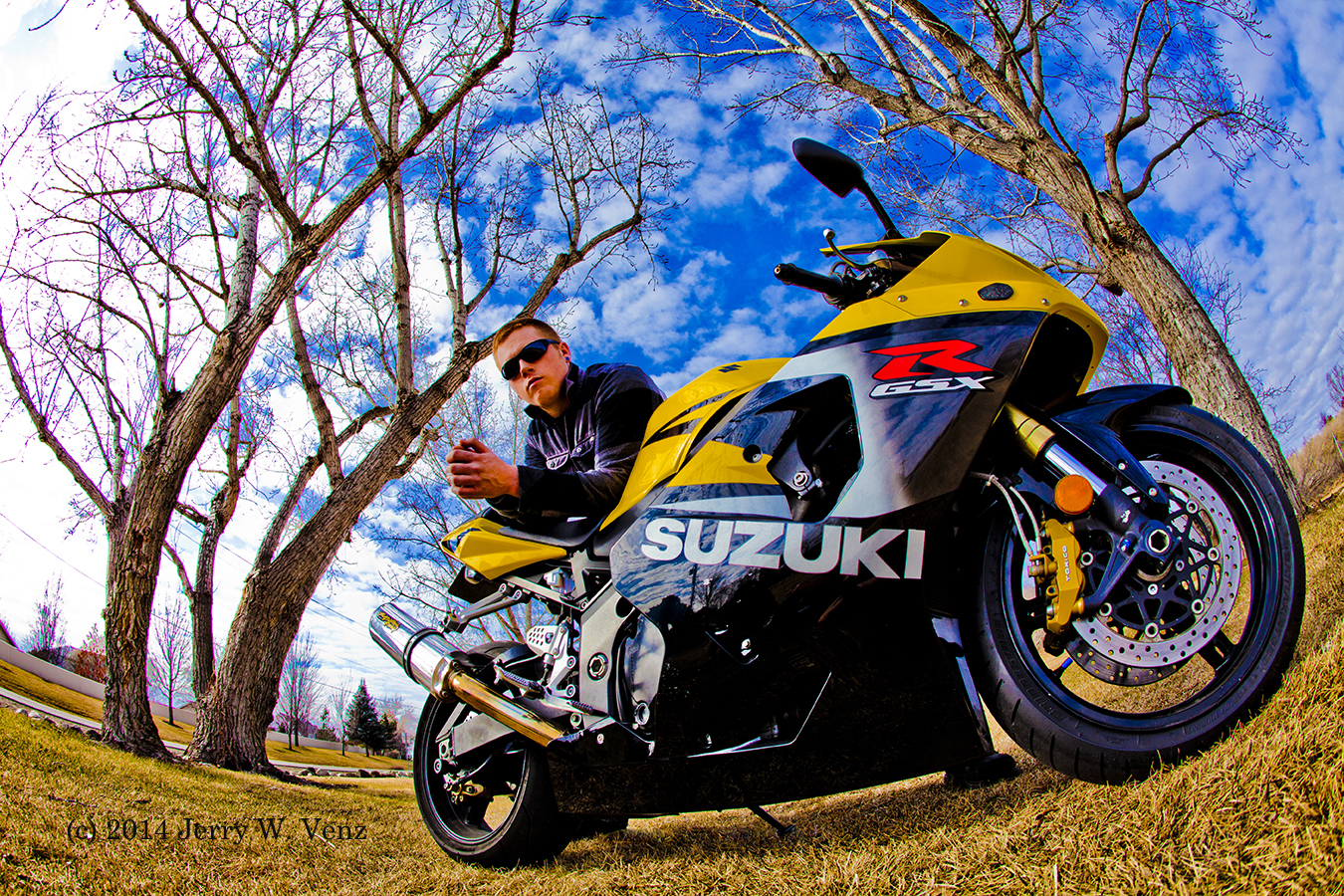 About ten days later, after he had his car detailed, we went back the same park, to photograph the more challenging subjects---the car and his dog.
In questioning him about his car (black with cool red wheels and some red graphics on the car) I suggested he wear dark colors with red accents of some kind.  That little bit of planning paid off!  He looked great and we had good color harmony!

For our last setup I moved him, for some individuals, over to this large piece of rusted machinery that was on display nearby. Very dramatic! 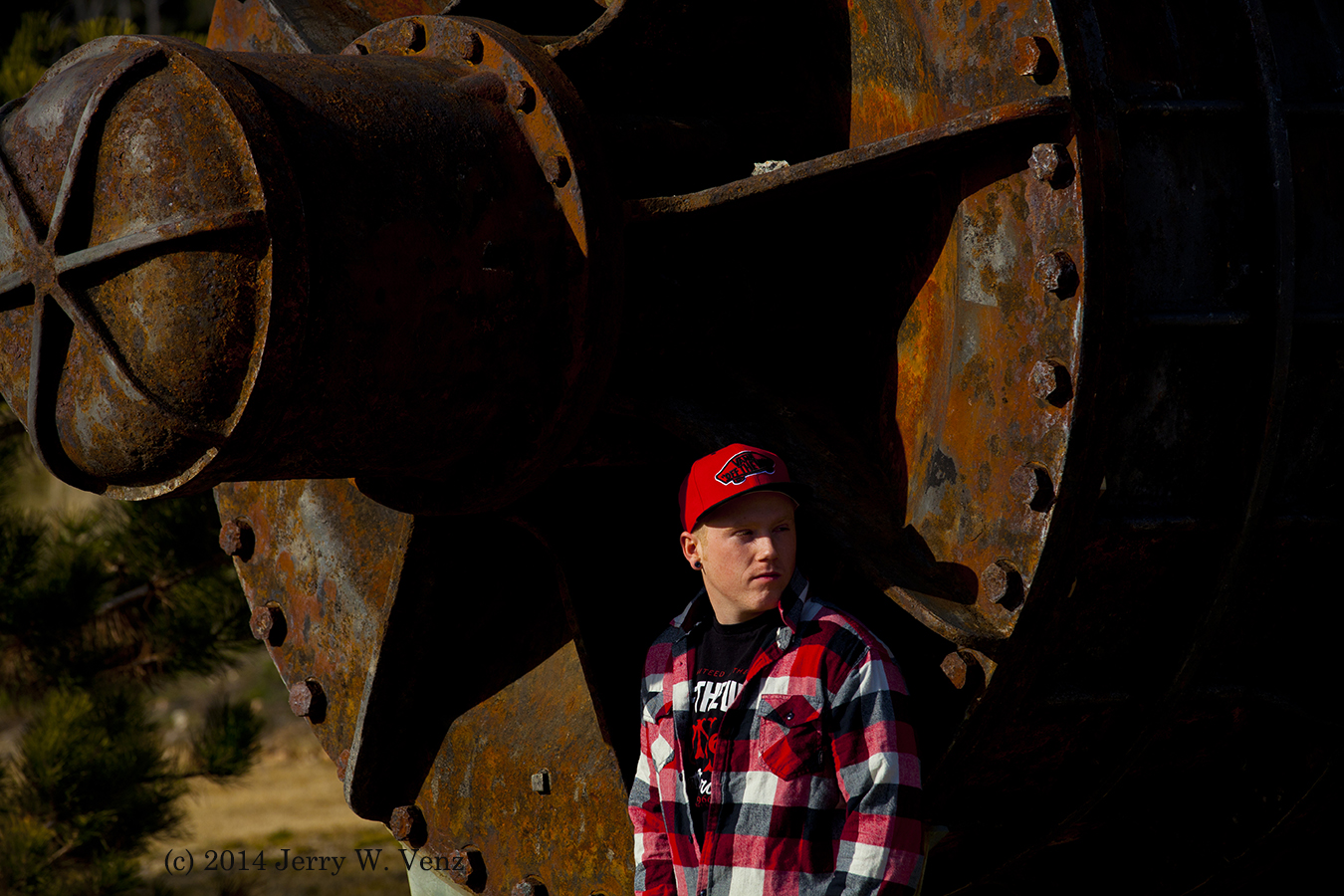 All of these images were taken with my 70-200mm f2.8 lens at 200mm or with my 15mm fisheye.  I like to work at the extreme ends when it comes to focal length where the look is far more dramatic and unusual---I don't use the middle focal lengths much…I don't even own a 50mm lens…BORING!

As usual if you have questions, please don't hesitate to ask...