THE COLOSSEUM: DAY AND NIGHT

Kathi and I only had two days in Rome on our way down to Naples and the Isle of Capri. So, I was determined to make the most of our time there by staying at a hotel within walking distance of the Colosseum and Palatine Hill. These were the two areas besides Pompeii and Capri that I really wanted to photograph.

On our day walk to the Colosseum I was awed, disappointed, and appalled, when we got there. 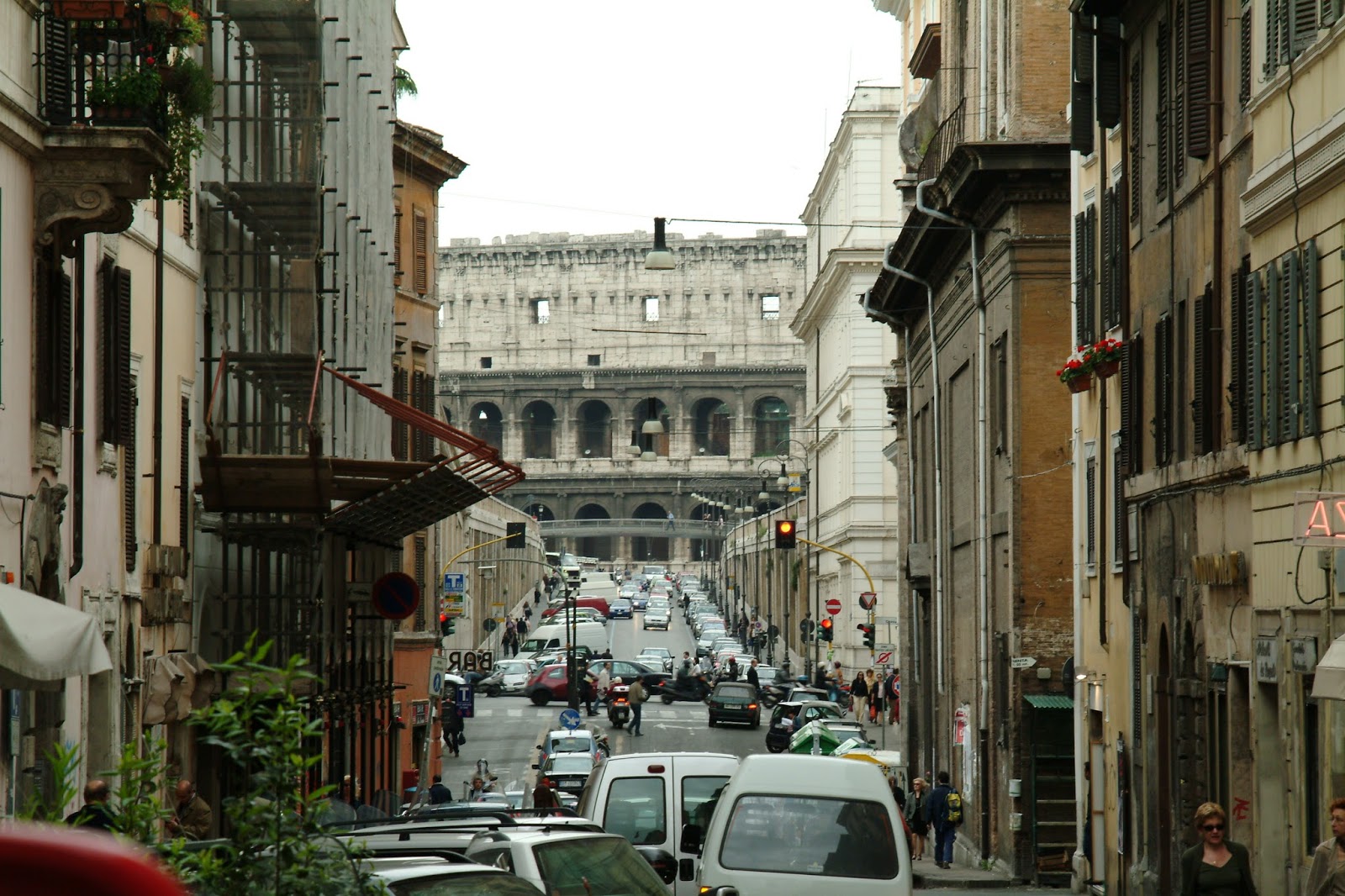 This was the view walking to the Colosseum from our hotel.  I was awed at it's size and the magnificent architecture and was disappointed in the ugly gray patina of the Colosseum in daylight--it didn't look any better when we got there, and appalled at the numbers of tourists already there in the morning.  There were six large tour buses there and more arriving as we approached.

It got worse as the buses unloaded and while the tour guides rounded-up their tourists, into platoon sized groups, some of the tourists actually lined-up to have their photos taken with the guys dressed-up in their cheesy Roman soldier costumes posed with the Colosseum in the background! It was more than I could take so we moved on.

This is when you should pass on the major outdoor tourist sites and go to a museum, a church, or just go have lunch. I vowed to come back at night.

Walking the six blocks at 11:30 that night was a little scary, having all my expensive photo gear and tripod, mostly because we were alone--we saw no tourists or locals and very little traffic. All concern melted away every time I looked down the street.  The Colosseum was aglow, internally lit by hundreds of incandescent lamps, looking like a huge four layer wedding cake spanning the end of the street.  The closer we got the larger it grew--it seemed twice as large at night than in daylight!

Having seen THOUSANDS of images of the Colosseum on the internet I felt it was my obligation to do something different with this beast.  So, I did what I often tell my students, "NARROW YOUR VISION ON LARGE SCENES."
I got out my medium zoom lens ( Nikkor, 24-85mm, f2.80-4.0, Macro ) and started carving-up the old "wedding cake" into nice pieces. I like showing the interesting details of great architecture.


EVERYBODY photographs this side of the broken structure--so I did a VERTICAL SLICE of it!

Closer to midnight a light rain had begun, we got out the umbrella, and I changed to my Nikkor 20mm f2.8 lens. With Kathi's help holding the umbrella to protect my lens--as I was titled-up--in a vertical composition, still only getting a slice of the Colosseum, this was my favorite image.

I was really happy it rained since that gave me the wet streets and the reflections of the street lights and cars' tail lights. I did the 4-second time exposures to get the cars' tail lights to streak as they went around the Colosseum. And, finally, I did the "Dutch tilt" to break-up the, very static, vertical and horizontal lines of the Colosseum.

The lesson I learned long ago when photographing major tourist sites is to avoid doing what everybody else is doing AND when they're doing it!  Those two things alone will dramatically improve your photography overall.