I decided to try some commercial style photography with a black rifle, a pistol and my shiny knives using TWO new things to add interest to the images. The first was back lighting a couple of my newer muslin hand painted backgrounds. The second was placing my subjects on a large sheet of silver mylar. Both of these things provided unforeseen variables in addition to the challenge of lighting the black guns and the very reflective knives.

My usual method of lighting in the studio is to use my Norman 500 watt second pack split three ways for the hair light and two background lights--you don't need a lot of watt seconds when you're front lighting something. I decided to use my ceiling mounted "hair light" at f16 as my main light but I didn't have enough left to back light the muslin. Since both these muslins are relatively new, they're thick with paint, and are still heavy and stiff.  I had to devote one of my Photogenic 500 watt second Powerlights at 3/4 power, close behind the muslins to get the colorful hot spot you see in the images. 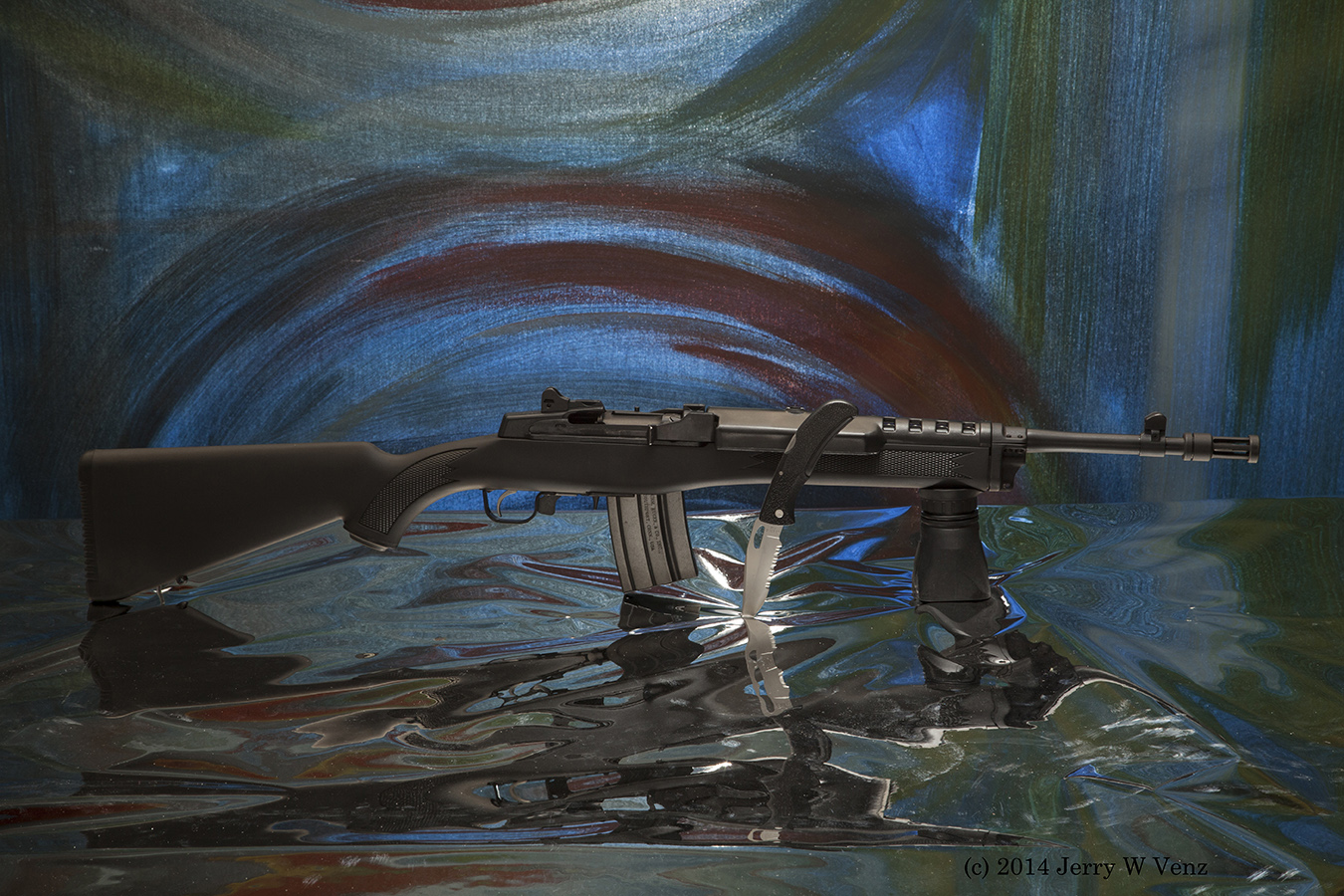 In order to use a nail placed behind each weapon, to hold them up, I put an old barn door on my table top set-up.  Over that was placed my silver mylar through which was hammered the nail.  I soon found out that EVERYTHING affects the mylar--usually negatively! The nail didn't do much but the weapons just resting on the top of the mylar created all kinds of distortions.  The old wood door boards with their gaps also gave me fits.  Then when I stabbed the pocket knife into the door the mylar changed again.  Even when I went to adjust the background height and passed by the table the air displaced by my body made the mylar ripple changing it's look yet again. Ugh... 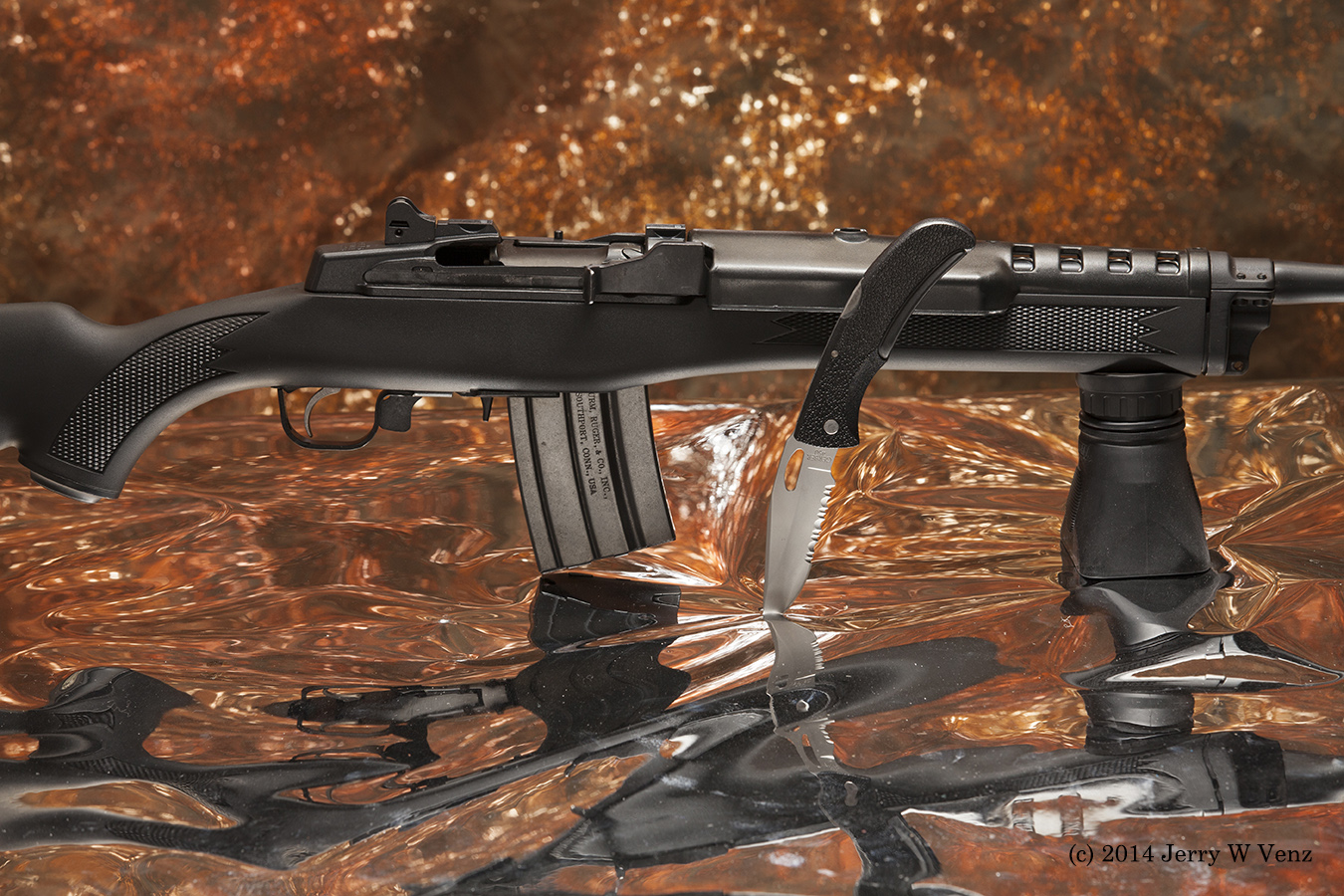 The most important thing I learned.

When lighting these shiny black guns I learned that the overhead main light could NOT directly hit the top of the gun's surface or I would blow-out tis detail.  The main light instead was aimed towards the front silver reflector directly in front of the table. (See the studio set-up image below.) 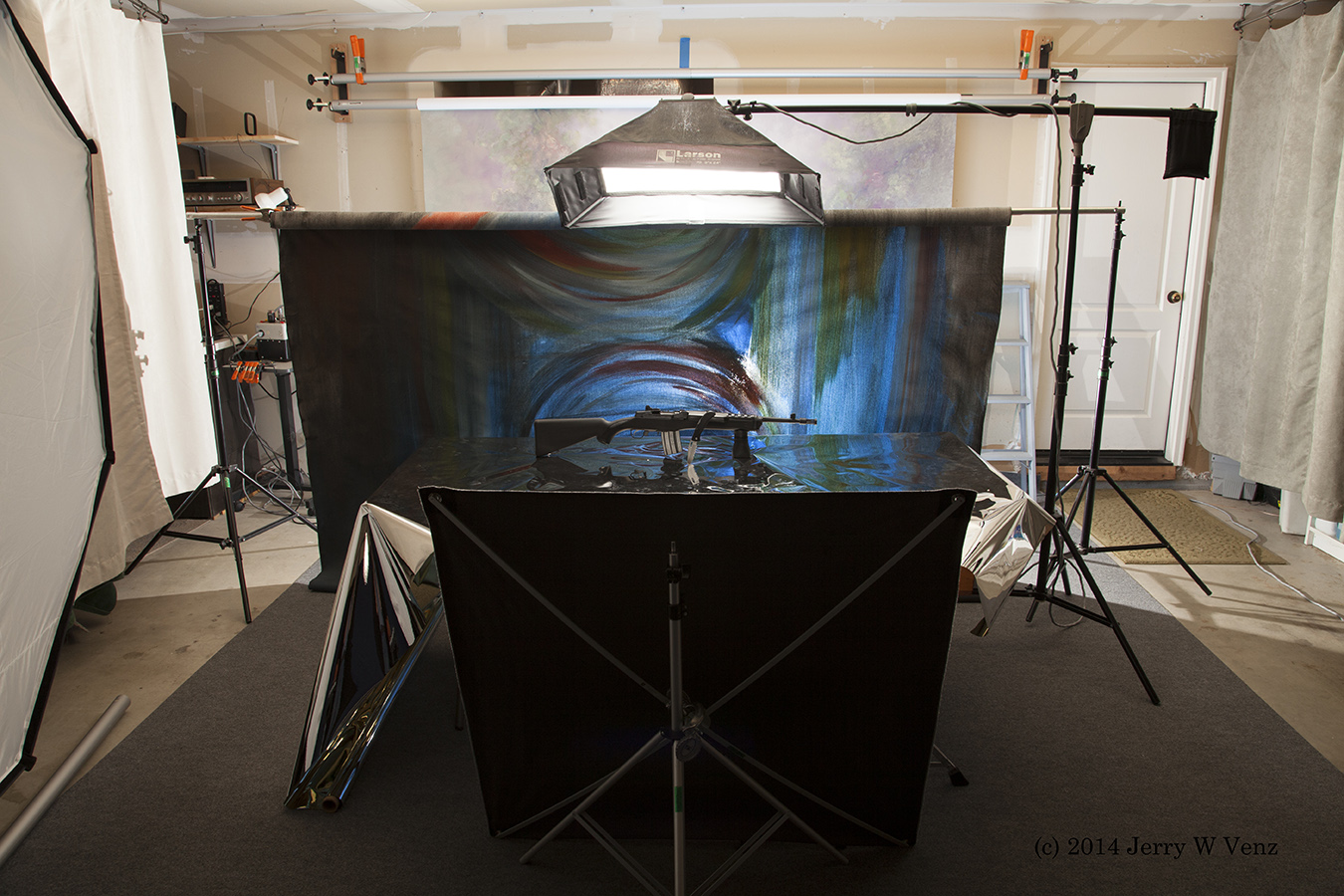 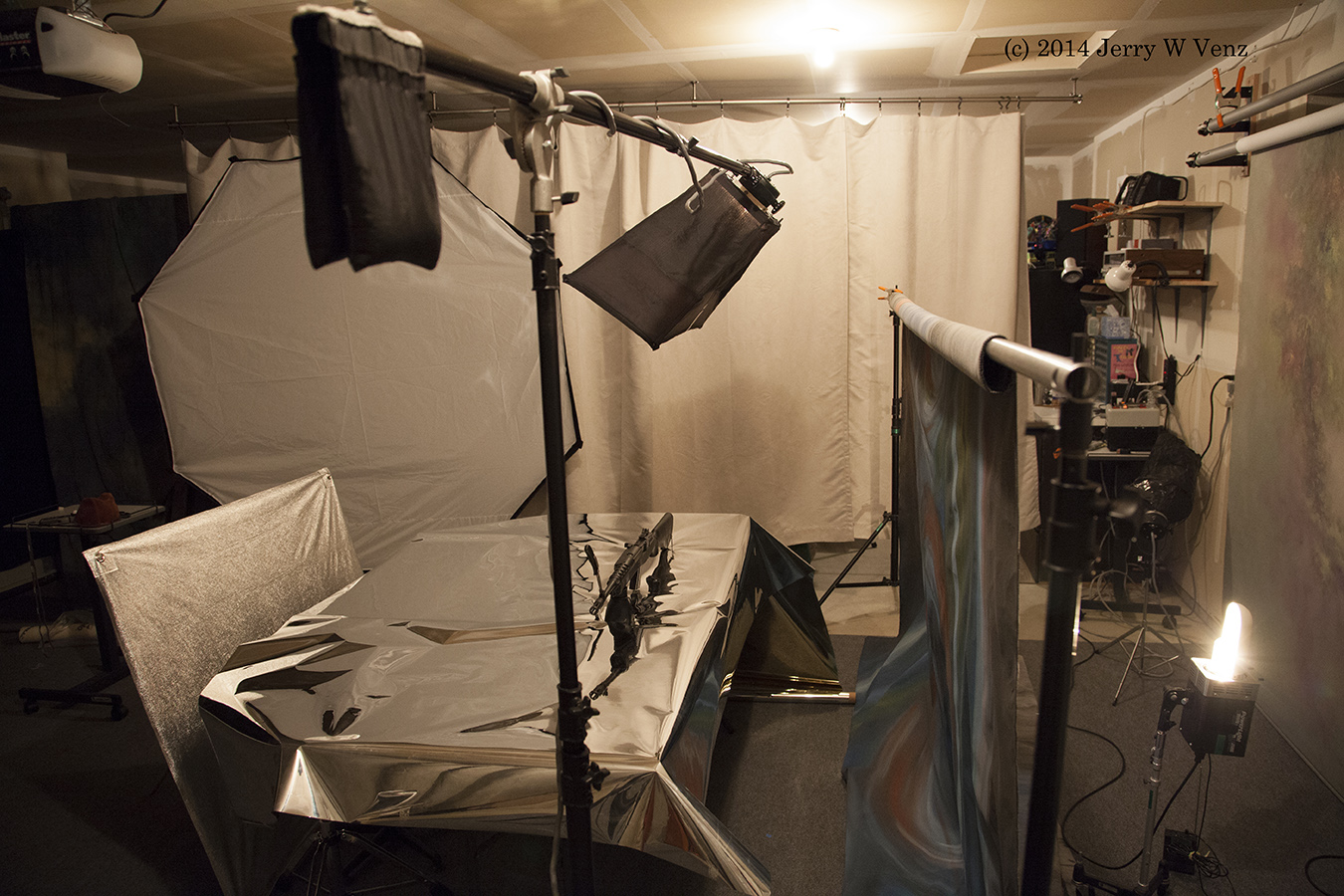 Encouraged by my results thus far, I moved-on to my Bowie Knife.  I found the knife was much harder when it came to lighting its large reflective surface because I did not want to just illuminate its surface with the flat lighting that I usually see in commercial ads of knives.  I wanted some shadowing to show its shape and texture. I accomplished my goal entirely with the front silver reflector.  To get the exact angle needed I had to rest the reflector against Me as I hand held the camera and raised one knee, just so, watching the play of the  shadow across the knife's surface and clicking the shutter at just the right moment!

It paid off in not just this resulting image… 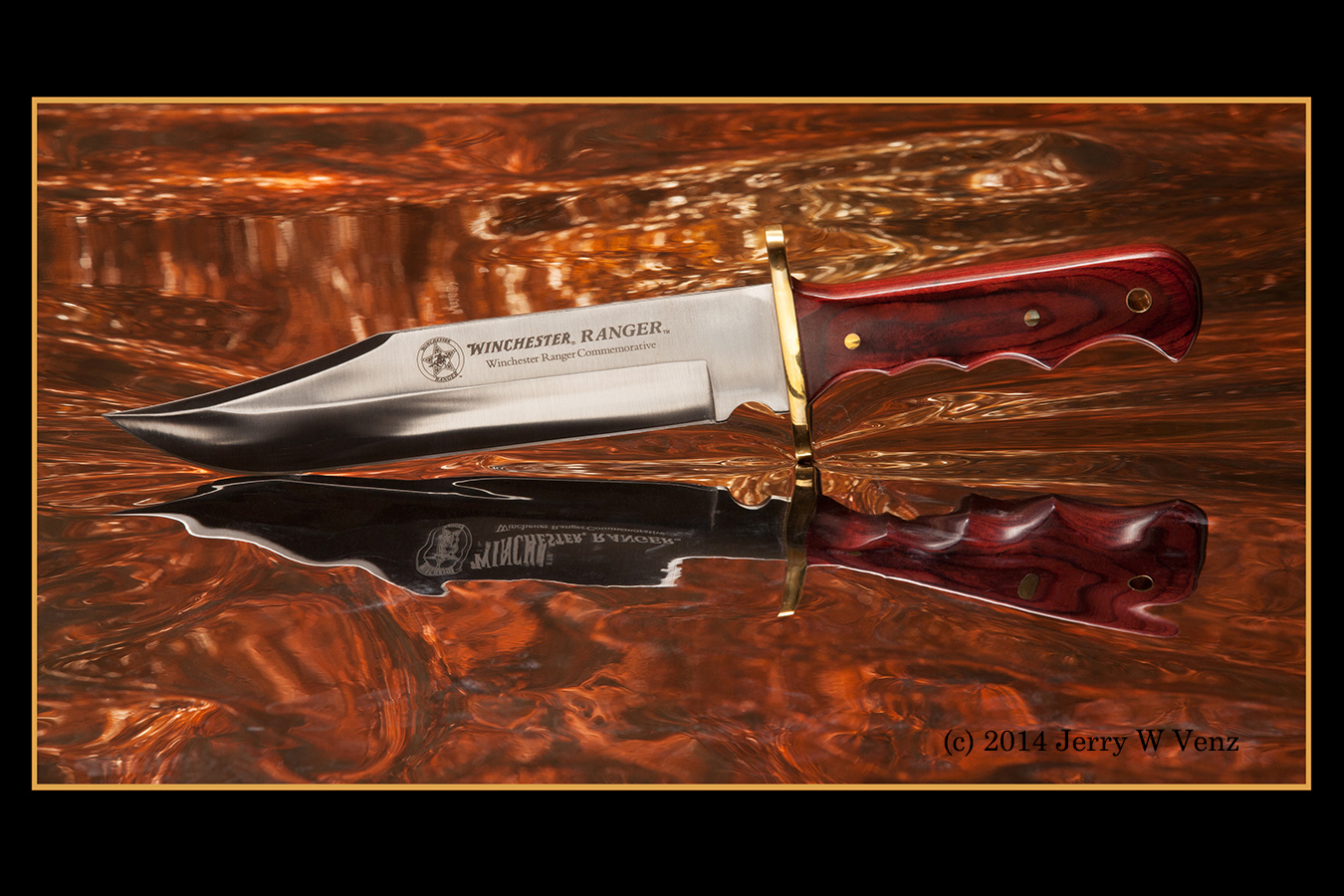