Having started in photography doing my own black and white fine art (wet) printing, over 40-years ago, it was only natural that when I turned professional and started doing weddings that some black and white film would be included in my work. However, it happened too often that my favorite image that I wanted to be in black and white was often taken on color negative film! And yes, I did try to print those color negs on Kodak Panalure paper for a black and white conversion, but it never looked as good as B&W prints from B&W film.

Well, digital cameras to the rescue! In 2001 we started using our DSLR’s for weddings and it was like the artistic handcuffs were finally off.  I was totally free to change my ISO at will.  Anything I did in color could be easily converted to B&W! I never looked back and as time passed there was no point in longing for film as all my favorite films and printing paper were discontinued anyway.

When and Why I Convert to B&W

Anything to do with the bride’s dress usually looks great in B&W provided her dress is white, off-white, or most pastels. (B&W can render those ugly pastels beautifully!)

The bride and groom together, in traditional garb, are ideal for B&W since, with him in a black tux, you have your reference black and white with detail in her dress.

B&W keeps your attention on the couple; you don’t tend to wander to the background. I then added some softness to the conversion for a more romantic feeling in their image. 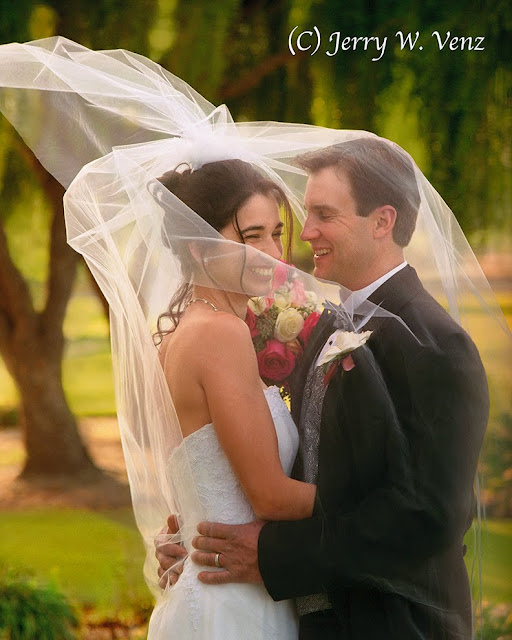 The original version had a nice background, but it was just too colorful and the overall sharpness of this image was a much too literal representation of the moment.

One of the reasons we did B&W in the film era was to enhance the look of the wedding album.  An all color wedding album, in my opinion, is just not as interesting or artistic without some B&W sprinkled in to accent its look.  The addition of B&W adds interest and keeps the viewer turning the pages to see what’s next.

My Take on “Spot Color” in B&W

It seems that the instant the digital camera was released the B&W image with a single patch of color (the first digital cliche) went viral in both the amateur and professional worlds.  As professionals, I think it’s our job to be creative and avoid the trendy and the cliche. That being said, when I tried out these effects early in my digital career I wanted an artistic, SUBTLE, inclusion of color in my B&W images.

I created this image in early 2002 with my first generation Fuji Pro S-1 camera. Looking at it by today’s standards its only flaw is the obvious lack of dynamic range—those early sensors could not record detail in the highlights like today’s professional DSLRs can.

In spite of that I entered a 16x20 Print of this image titled: Black and White and Something Blue in the PPA (Professional Photographers of America) International Print competition that year and won a merit in the very tough wedding category—overcoming the double cliche of being a wedding dress image AND a spot color image! I think the title helped this image a lot.

Winning that Merit was instrumental in earning my PPA Masters Degree that same year.

As usual, should you have any questions or comments don’t hesitate….’Til next week…