EQUESTRIAN PHOTOGRAPHY ON THE BEACH

This session was part of an engagement session for an upcoming wedding. My vision for this final image was of the couple galloping side by side, on their respective courses in the surf.  Well the best laid plans are easily shot-down by the unpredictable nature of horses! It turned out that the horse he borrowed (big mistake) was terrified of the surf—and sat on it’s tail, did a 180 and ran the other way as soon as it’s hooves touched the water!

So, we were down to her and her horse, which greatly simplified the execution and composition of this image.

My experience doing portraits of people while mounted atop their horses taught me that my camera position needed to be at least as high as the chest of the rider.

One of the basic rules of portraiture is that you don’t want to be “shooting” up people’s noses! Therefore, I’m usually on the 6-foot ladder when we are all on level ground. One of the important compositional side benefits is with my high position I can often place the rider’s head below the horizon line creating a better background.

So, to prepare the this session I made a ladder platform (so my ladder would not sink into the dry sand) using a three foot square piece of plywood, screwed some handles on it, and used my 3-foot ladder since I planned to be on the elevated sand away from the surf.

1) My high angle down eliminated the sky, which would have just blown-out anyway.
2) This backed me off enough to use the 180mm lens on my Mamiya RB-67, so I could compress the scene, crop in camera, and make the pan easier.  Yes, I’m hand holding my RB-67 with a 180mm lens and bellows lens shade!

So here was the result…

I had her ride the horse in a big circle around me coming to a full gallop only in the surf.  We did that six times, so, I only made One Exposure each time they galloped by—those of you familiar with the Mamiya RB-67 know why!  The one thing I did not count on was the how much the ground would shake when they rode my me….Wow what an experience on top the ladder!  The rest of the session went well, they loved the images and their wedding was great too.

The icing on the cake was my print of this image, when entered into PPA’s International Print Competition (1996) was chosen for their traveling loan collection—the highest award PPA bestows on an individual print.

As usual questions are welcome….’til next week.

WHAT WAS MY LIGHTING TECHNIQUE IN THIS IMAGE? THE ANSWER

When we as professional portrait photographers look at a portrait we look to the eyes of the subject and the shadow pattern (if any) on the mask of the face to determine how the subject was lit.

As for the eyes I look for the position of the catch lights and the size and shape as well.  The catch lights should not be dead center in the pupils and ideally they should be large and round—not square or rectangular (outside the studio) or worse yet hard-pinpoints (I call these Ice-Pick catchlights) most generally caused by speed lights.

Outside the studio we should make our lighting look as natural as possible.  Centered catch lights meaning the key light is coming mainly from the front just washes out any shadows creating flat lighting. Without shadows you loose three dimensionality in your subject.

So, in my example portrait I first placed my subject in a spot that had nice back light for separation and visual interest. In addition, I have her placed near a large rock surrounded by trees just out of frame to camera left. The rock and trees are acting as Gobos—blocking light and creating a nice shadow on the left side of her face.  This is called negative fill or subtractive lighting.

The key light is a large patch of open blue sky creating a nice soft, yet directional, lighting pattern on her face.
I typically use f4.5 to get the entire face sharp, yet still blur out the background nicely because my lens is at 200mm.

It’s that simple!!  Feel free ask me anything about this type of lighting.

WHAT WAS MY LIGHTING TECHNIQUE IN THIS IMAGE? DO YOU KNOW?

Looking at other photographer’s portraits and deducing how the lighting was done can be very educational and it’s fun too!

If you’re a beginning portrait photographer it’s a great way to challenge your ability to see light direction and evaluate shadow and lens technique as well.

As a PPA (Professional Photographers of America) Certified, Master, Craftsman with over 30 years experience doing portraits ( http://www.TheStorytellersUsa.com ) it’s my hobby to check out other PPA photographer’s web sites, evaluate their portfolios, and offer them constructive critiques of their portraits.

Since I’ve been judging professional print competitions for decades, this comes naturally to me and I really enjoy helping other photographers improve their craft.

So, please give me your take on this portrait I did recently of this high school senior.

How did I light her?

What focal length lens do you think I used?

What f-stop do you think I used? 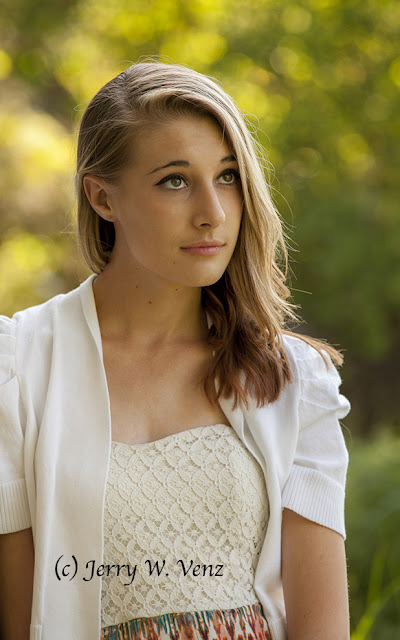 Look forward to hearing from you this week.  Next week I will give you all the details on this image and you can check on how well you did.

We just had our 25th Annual Spirit of Boise Balloon Classic and as usual I had a blast photographing this very challenging event.  My approach as a professional photographer is very different than most amateurs (or other pros) from the results I see posted on the web.  It seems that most photographers either try to cram as many balloons, into each frame they expose, as they can or they do a solitary balloon dead center in a frame. In either case there is no composition; the former is chaos and the latter is static and boring.

When I photograph hot-air balloons my goal is to filter out the chaos with composition—I narrow my view looking for alignments of these colorful subjects into compositional layers.  One of the compositional rules I employ is the classic foreground, mid-ground, and background. Using this technique with hot-air balloons is very challenging especially when some 40+ balloons are launching all at once, all around you! So, what I do is narrow my view to include fewer balloons and create layers of balloons by changing my position constantly as the balloons change their positions…such as this:

In addition there’s beautiful directional lighting because of the balloons I choose and where I choose to stand. You see in addition to all this compositional stuff I also want the best lighting I can get as well!  Whenever I can I want the sunrise light to skim across the surfaces of my balloons—creating shadows and three-dimensionality. If I see a balloon scene coming together that’s got all front light (flat light) I’ll quickly move 90 degrees to get the side light I’m talking about; no easy feat with the size of my subjects and all the other spectators and photographers on the field at the same time!

When I do photography of a single balloon I usually don’t show the whole balloon to avoid a static composition.  In the example below I zoomed  in…

One of my favorite aspects of hot-air balloons is the fire!  Again, I’m looking for some layers in these images as well.  Even in a vertical composition such as this next image I managed to get multiple balloons in the frame with my main subject…

Another image I like to create is a close in portrait of the people in the balloon’s basket—making it appear that the image was shot in the air (balloon to balloon). This requires a telephoto (at least 200mm), which puts distance between you and the balloon so that the angle of view does not appear to be shooting UP at the balloon.  Like this…

When I do this I want the basket of my subject balloon to be layered against another balloon to create an interesting background. It’s not easy since all these balloons are in motion it may only take 15 or 20 seconds for the front balloon to make it’s transit across the back balloon.

I can’t wait ’till next year’s Boise Balloon Classic!