Before there was Photoshop and  digital cameras the film we choose determined the look and style of our photography. One of the ways that you can set yourself apart creatively from other photographers is to do something they aren’t doing. Show people a vision (your interpretation) of things in the world they have not seen before. So, anytime I could push the boundaries and alter reality I would chose a film of alternate wavelength (infrared!) in either color or Black & White.

For B&W infrared I used Kodak Professional High speed infrared film (HIE) in 35mm format. It covered the visible spectrum, some ultra violet radiation, and to about 900nm in the infrared region. Kodak suggested using a No. 25 red filter on the lens and 50 ASA while bracketing exposure four or five stops.  Because of its sensitivity you had to load the film into the camera in total darkness.

Here’s an example from a series I did in 1976 of the famous “freeway interchange to nowhere” in San Jose, California…
I liked using my Minolta 16mm fisheye lens when doing infrared because of its tremendous depth-of-field kept everything in focus (you can’t focus your lens for the infrared spectrum) and this lens has several built in filters, on a rotating bezel, that made it easy to use with B&W or Color infrared. The only filter it was lacking was the NO. 25 red—that’s why I used the 056 (orange) filter when doing B&W infrared.

What I really liked about using film for infrared photography was that beautiful grain! The grain gave the image a texture that I don’t see these days using digital techniques.

By way of comparison here’s a modern digital infrared image my son created using his converted DSLR….
My son, Alex, had his camera converted to capture infrared by Life Pixel. What’s nice about his modification is that his camera will create both B&W and Color infrared images. In the old film days we had to change films to do that. I guess the bad thing is that once converted that camera will ONLY do infrared capture.

I think Alex created a fabulous artistic vision here (at the Japanese Hakone Gardens in Saratoga, California) that rivals any modern infrared I’ve seen to date. (In my totally unbiased, humble, opinion!)  What strikes me first about these digital IR converted cameras is the smoothness of their images. There’s no apparent grain and the hard clarity they produce is often hard to look at. I guess I’m just old school—I miss the look of grain in B&W films like Kodak Infrared, and Later T-Max 3200 (pushed at least 1-stop). Sadly, these films are long gone—yes we still have Tri-X, but for how long?

That’s it for this week….Let me know if you have questions or would like me to write something you have issues with.  ’Til next week…

THE DELIGHTS AND DANGERS OF CROPPING YOUR DIGITAL FILES

Whenever I discover an interesting subject for my fine art portfolio I usually cover it well. Photographing it from multiple angles and using different focal lengths—carving it up into detailed sections. It’s interesting that no matter what I see at the moment when I photograph the actual subject when I revisit my images (months, sometimes years later) I always see another way to create a new—often better—version of the image by simply cropping it differently. And then I kick myself for not doing that crop in camera!  Why? What’s the big deal about simply cropping that image file?  Well, if you ever want to print that image as a wall print, say larger than 11x14”, how many pixels can you afford to loose and still make a stunning print?

As an example here’s the resulting cropped image from one of the “record-shots” of a cool old truck….I photographed 6-years ago…

After I reworked the rather boring record shot over in camera raw and with some tone mapping in Photoshop this crop made the image far more compelling. (albeit a bit cliche´.) 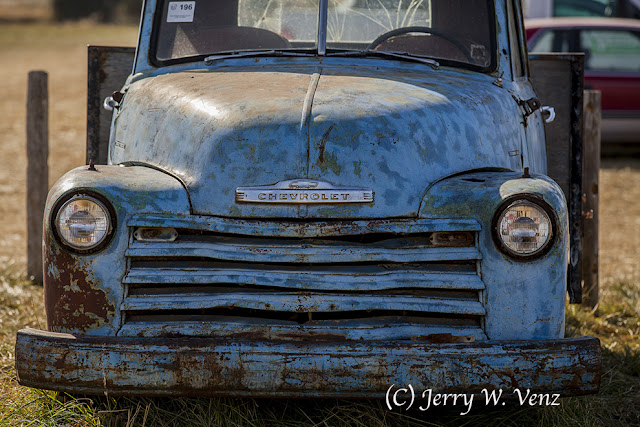 You can see why I passed over this image and concentrated on several other unique images (of the hundreds I took) that did not need cropping.  So, back to file size in our digital world. Unlike in our medium format film days we can’t just willy-nilly crop away half or three quarters of our image area and expect to make a quality wall print. It all depends on what you’re starting with. Since our film has been replaced by a digital sensor it’s not just how many pixels your camera has…it’s the size of the sensor—don’t expect a four/thirds sensor to perform like a full-frame sensor! That’s why just carving-up a small sensor to make it 25 or 30mp’s is currently folly, because when you reduce cell site size you increase noise.

My Pro-DSLR produces a RAW file of, on average, 30MB. When converted to a jpeg the resulting file is 15 to 25 MB.

So, this is how my jpeg evolved from capture thru editing and cropping…
The cropping I did (not quite half the image area) really reduced my file size. Fortunately, I’m starting with a pretty healthy file size (but I could really use a 50MP sensor!) and my Photoshop edits with the tone mapping increased my final file size to a usable 11.75MB.  So, this post capture crop worked for me—this image looks good at 200% in Photoshop—but it would have been even better if I had moved in closer and created it like my crop!

We love getting our high school seniors outside for their portraits. It’s been a long, hard record breaking, winter here in Idaho, so I was happy to see that by the end of April one of our favorite parks—Merrill Park in Eagle, Idaho—was back to life!  We take a lot of our Eagle High School Seniors to Merrill Park because it has a surprising number of good areas for portraits for such a small park and I love the split rail fences that surround this park.

So, with our sunset at 8:40pm we had mom and her daughter meet us a the park at 6:30pm—our usual two hours before sunset start time. As is my style when doing pure natural light portraits I keep the setting sun behind my subject to create a nice glow in the background for subject separation and visual interest. The only light I let strike may subject is natural sky light—the sky is my soft box!

And our cute young lady of this session….
This image was one of the favorites from her session.  It illustrates why I use the most telephoto I can along with a modestly wide aperture. With my lens at or near 200mm I can get a nice soft background even with the f4.5 aperture while still getting nice depth-of-field on my subject. This image was in the last set-up of her session—one hour before sunset.

Earlier in the session…
With the sun higher—two hours before sunset—we put her in the shade of the monolithic rocks that march across the back of the park. That kept the harsh sunlight at bay giving her nice, soft, sky light as her main light.

Then at my favorite split rail fence….
We started here about an hour and a half before sunset doing several poses. As you can see with proper placement of your subject, using only a large patch of blue sky as the main light, there’s NO need for ANY reflectors and certainly no reason to wreck this beautiful light with the superfluous addition of flash (YUCK!).

Let me know if you have any questions…’Til next week….

By mid-year in 1976 I had given up trying to capture or create a single image on film to symbolize our bicentennial.  It just seemed impossible to create an image that was not trite or cliche—like bursting fireworks or some such thing.

So, towards the end of the year—I think it was November—I was out doing some photography in an orchard in Santa Clara (California) during the “magic hour” when I spotted this old barn about 75 yards away.  Even at that distance I could see the light was perfect for whatever was on this outside wall.  As I moved closer I was amazed to see this marvelously detailed slice of Americana…
I love the textures and details brought out by the strong side light from the setting sun—my style to this day!  And those details….the real feather duster and the rusted scissors and chains. And when was that old scale (made from wood!) made? Of course my 1976 theme was made complete when the owners tacked-up the 1976 US Bicentennial calendar over the previous year’s calendar.

All I did when I copied the original slide was crop some off two sides because the slide was damaged. Once in Photoshop I did a single image tone map (dark) to enhance the already warm detail and then I brought the whites UP to make the 1976 calendar stand out.

I must say that without our current digital capabilities and the editing powers of Photoshop this image would never have been seen by the public. A perfect blend of old and new.

The problem I most often encounter with natural light outdoors is that there’s simply too much light! It’s bouncing all over the place, creating multiple sources, making the light on my subjects FLAT. My goal is to create dramatic, directional, lighting especially when I do portrait of individuals.

The following video is one of my on-location training videos, from my teaching site LightAtTheEdge.com (you can find a direct link at the end of this post), illustrating how I create three-dimensional lighting using ONLY a Gobo (black flag) to shape pure natural light. 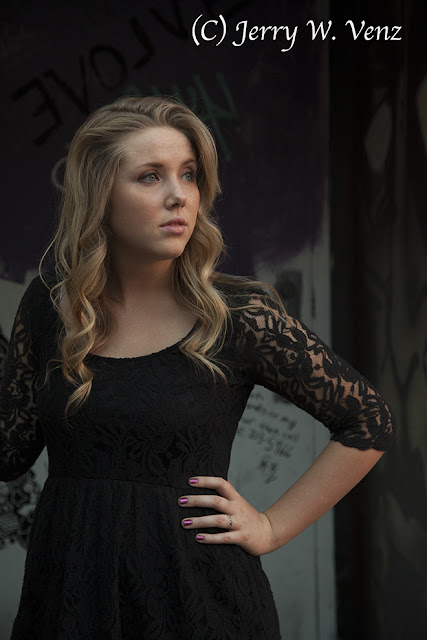 In the world of cinematography we called this (using a black flag or Gobo to subtract light) Negative Fill and it works fine for individuals, but if photographing a group I use a large natural gobo on my location. I look for rows of trees or large bushes; downtown I’ll use buildings. In a home setting I may use a porch—just as long as I have some open sky opposite these Gobos.

I think the reason so few still photographers use this technique is that they’re too busy copying each other’s bad habits—like using flash and/or reflectors outside even when there’s perfectly good natural light in evidence!  So, open your mind and eyes to all the great natural light out there.

Don’t just be a strobist—be a portrait artist!

Posted by The Goboist at 6:46 AM No comments: