Oddly some of the worst lighting I see these days is by studio photographers.  It’s ironic because studio portrait photography hit its zenith in technique and gained world wide fame in the 20th century from the masters I studied like Yosef Karsh, Aronold Newman, and George Hurrell.  Don’t photographers today study these masters?

What I see way too much are portraits using flat lighting—as though the photographer was going to photograph a postage stamp collection. Flat Lighting is fine if your subject has only two-dimensions.  Otherwise, there’s no excuse for flat lighting in the studio!

It’s in the studio where we have TOTAL CONTROL of both light and camera placement.  In the studio we are God—saying, “Let there be Light” exactly where we want it!

It’s all about direction….

For this little girl’s portrait I had my main light close to the 9 o’clock position with a soft white reflector at the 3 o’clock. No other fill was used.

NOTE:  The key to directional lighting is to not ruin it with fill light.  I never us a fill light in my studio--not even with groups! 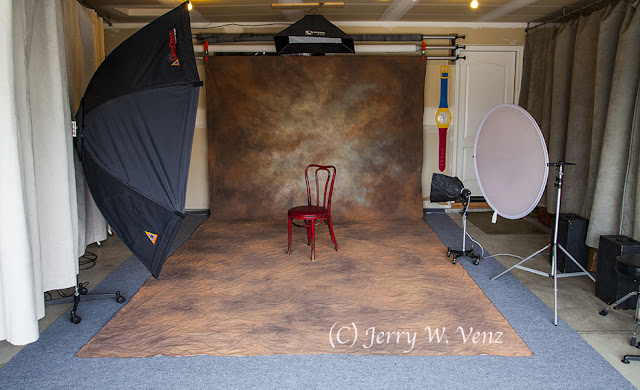 That main light, on wheels, is a 7-foot OctoDome by Photoflex; nothing “wraps” better than a large soft box.

And a ballerina on that background….
For her portrait I had the main light at 9 o’clock with it feathered away from the background. No reflector or other fill was used. The “hair light” was left on to light her raised foot.

Showing how a large main light will “wrap” on a group….
In this portrait I placed my main light on the left at about the 7 o’clock position—just out of my camera’s view. I did use a soft white reflector on the right at the 3 o’clock position.

“The Artist who can make his subject appear to be in the relivo (made to appear to have elevation, with depth and dimension) is he who should receive the greatest praise.”

So, go forth fellow photogs. and work on your “relivo”!  ’Til next week….