I’ve been doing photography of Hakone Gardens (Saratoga, CA) bamboo since 2003. This beautiful 100 year old Japanese garden has many traditional Japanese features that have evolved over the decades making it a real treasure in California’s Silicon Valley. Hakone began receiving some highly prized and fragile bamboo from Yasui, Japan in 1985 and with other local donations the bamboo gardens flourished under the care of the Bamboo Society. Because of the fragile nature of sprouting bamboo access to the bamboo gardens by the general public was limited—behind locked gates. Because of the donations of my photographs documenting Hakone I was granted access to the bamboo gardens whenever I felt the timing was right (the best lighting) for great images.

This is the view of the bamboo garden (in the background) as scene from Hakone’s parking lot.

Taken in August I chose open shade in the evening, to capture the greenery without blowing out the highlights that happens when direct sunlight falls on leaves.

This is the view of the entrance to the bamboo gardens just after the gate…
I did this on an April morning. Most of the time I find that one or two hours before sunset (the”Magic Hour”) gives me the best directional natural light for most outdoor photography, but inside the bamboo garden the only time sunlight penetrated that area was in the morning.
A nice example of directional natural light using selective depth-of-field and a relatively wide aperture to high light that oddly shaped growth of bamboo. 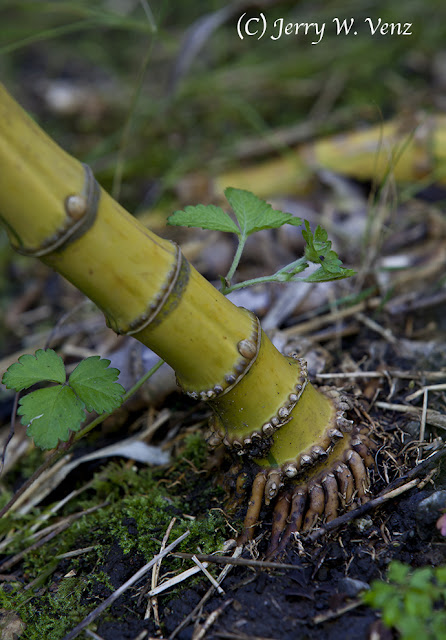 The tendrils at the base of the plant travel down and create the rhizome system that spreads out to nurture a forrest of bamboo.

The shoots sprout around the mature bamboo and grow very rapidly—up to 36” in 24 hours! 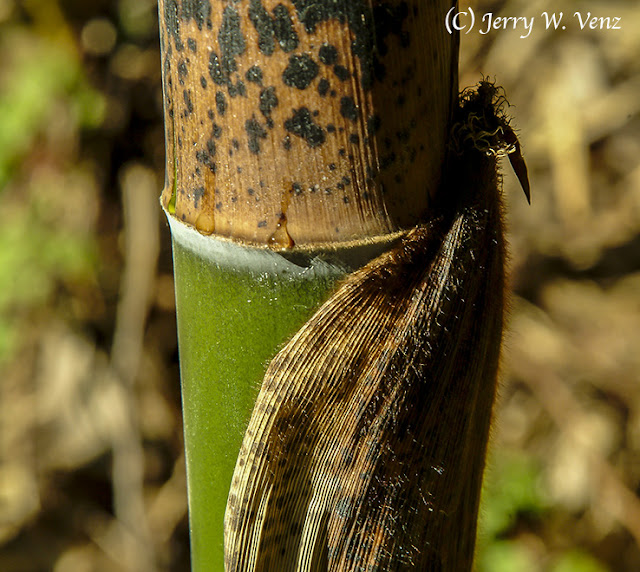 This close-up shows the protective sheath starting to fall away from the now hardened culm; the green area. 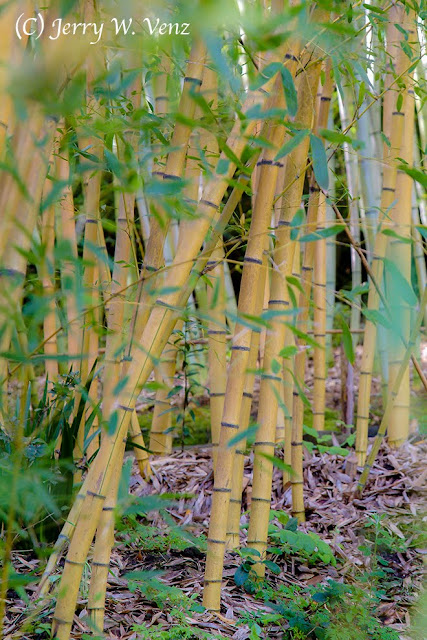 Then you end up with a forrest of bamboo in no time! This is the rare, highly ornamental, Tortoise Shell Bamboo; called Kikko in Japan. 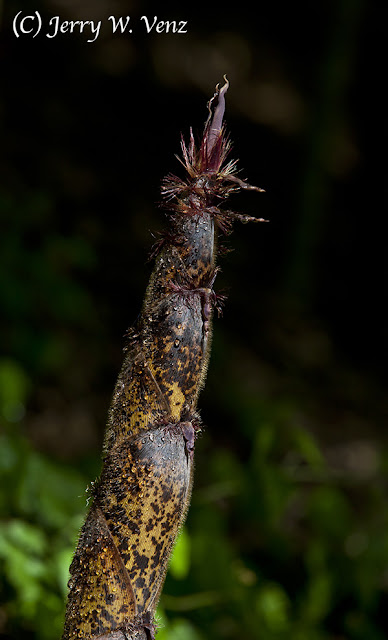 Here’s some nice lighting showing the detail on a bamboo shoot.  Is it me or does the top of that thing look like a crowing rooster?  I really like learning about what I am photographing…it gives my images more meaning…Fascinating stuff—bamboo—hope you enjoyed seeing its genesis.

PHOTOGRAPHY OF A JAPANESE GARDEN IN BLOOM

I’ve been documenting the beauty of the Hakone Japanese Gardens in Saratoga, California, for over 20 years. As one of the National Trust for Historic Preservation’s premier sites and 100 years old Hakone is one of the oldest Japanese gardens in the Western Hemisphere. In 2004 It was selected as one of 12 national sites to receive funding under the Save America’s Treasures Program. In 2013 it was placed on the National Register of Historic Places.

Here’s the entrance to the gardens....


The main gate, with its large double doors, constructed using bamboo, has always been a favorite feature of mine. One of the best times to photograph the gardens is in early April when the most colorful blooms appear. This view shows off one of the garden’s most well know features—the bridge over the Koi pond with that old gnarled tree at its entrance.

I waited for backlight for this image to really make the blossoms and the tree’s foliage glow.

The wisteria covered gazebo, on the pond, is one of my favorite spots at Hakone…

This was done April 10th at 3pm; I photograph the wisteria either under overcast sky or I wait until its not in direct sunlight to avoid over exposure of its highlights.

Then there’s the marvelous waterfall…

This waterfall cascades down three tiers in a span of about 12 feet. It was taken the day after the last image, but I came back at nearly 7pm so that this side of the mountain would be in total shade to control the highlights and lower the overall light level.  Then I could use a 1-second time exposure to get the smooth effect on the falling water.   I still had to lower my ISO and use an aperture of f22.0 but that was by design because I wanted lots of depth-of-field too!

At the end of February my favorite tree blooms….

This is a Japanese weeping cherry tree. I really like the dramatic color contrast of its blossoms against the greenery in the background.

I did this image at noon on an overcast day to, again, control the highlights. With blossoms like this you must do close-ups…
Next week we’ll go into Hakone’s secret bamboo garden and see what few tourists get to witness—the genesis of bamboo. ’Til next week…

If you’ve read my blogs before you know that I rarely use flash as a main or even as fill when I do photography outside. It just does not blend well with natural or even continuous artificial lights.   The great thing about our professional digital cameras is that we can use much higher ISO’s, with less noise, longer exposures, (on a tripod) and with the recovery possible using RAW files, it’s amazing what can be accomplished now without resorting to supplemental flash.

As an example the following commercial shoot I did outside about an hour after sunset was done with only the existing ambient and the continuous artificial lights at the location. I wanted those white Christmas lights on the truck to stand out; if I had used flash not only would those lights have all but disappeared, but the snow would have been way too bright.

The key to this image working was proper exposure of the highlights without too much under exposure of the darker areas. The most important highlight area was the large lighted Zamzows sign that was about 25 yards behind the truck. So, I exposed for that lighted sign and let the truck go a little underexposed. However, since upon reviewing the image on my camera I saw that I could read the lettering on the truck and I still had detail in the deep shadows I knew that I could recover all that underexposed area in post processing.

Here is the original file….

It’s remarkable what can be done just using Adobe Camera Raw to bring down highlights or recover shadow detail; ACR can recover 2-stops or more in a RAW file.

Here’s my ACR adjustments on this file:
After sharpening at: 67 I used Noise Reduction:
And finally I adjusted the white balance to remove blue from the snow and warm the scene a bit. Quick and easy…

Ask if you have questions…’Til next week…

If you’re looking for a quick, easy, method to photograph reflective subjects then look up tutorials using a light tent or cube because you’re not going to find it here. As a full time professional with over thirty years of studio experience I’ve never done studio photography the easy way.  The easy way is boring—like the results of just sticking a product in a light cube—and rarely produces anything striking, different, or creative.

Most photographers using light cubes usually create flat lit subjects floating in a featureless void that is good for web product catalogs. This technique is also good for quick through put, not creativity. Whereas the studio photographers that built a custom set with complementary backgrounds, specialized product support and lighting designed to best showcase the products details always made the product appear more valuable and worthy of a hi-end catalog.

I’ve found over the years by doing it the hard way that even if I fail in a studio set-up I always learn something valuable that improves that “shoot” and others in the future.

So, here’s my super shiny target pistol as a nice example of a difficult reflective subject…

And just to make it more difficult I placed the pistol on Mylar over a rough surface!

The only thing different here is the background change-out for the photos of a rifle. As you can see I only used ONE LIGHT and a REFLECTOR!

Here is a side view of the lighting set-up…


Important:  This is the most critical illustration of my set-up as it shows the Direction of the main light and its Relationship to the reflector.

NOTE:  That the main Light is NOT Pointed Directly at the gun; It’s pointed at the reflector.  Or, more precisely, my overhead main light is aimed so that tis trailing edge is just missing the top edge of the gun. This is why the modeling lights on professional studio flash units are so valuable. In a darkened studio the modeling lights on each flash head tell you exactly where each light is pointed showing us its effect.  In this case I merely tilted the overhead main’s soft box down until I saw its light hit the top edge of the gun and then tilted it back up just enough to miss its directly illuminating the gun. Why? If you point your main light at the highly reflective subject the highlights created will all just blow-out, and blown-out highlights—especially with digital cameras—are not recoverable.

Background Light:
To illuminate the backgrounds for these gun photos I tried something different. I used back lighting instead of the usual front lighting often used in the studio.  Why?
This shoot-through technique worked really well, but because theses hand painted muslins are so thick I did have to use one of my photogenic 500 watt second power lights at nearly full power to be able to use f13.0 for my aperture; and than I had to go to 400 ISO to get the exposure I wanted.

Hope you enjoyed….’Til next week…