…AND THEN SOMETIMES A B&W IMAGE SHOULD BE IN COLOR!

In last week’s blog I talked about the why, when and how of converting color images to B&W. In previous blogs on this topic I suggested that today’s digital photographers should always capture their images in color (RAW) and then decide after wether to proceed to B&W conversion. That way you have the most choices and the most to work with in your file size.

However, back in 2001 our choices were not so flexible or simple. At that time we were just starting to transition to digital so I was still using my medium format film cameras for most of my work. Back then when it came to fine art photography I would not decide on what film to load until I was in front of my subject. Usually the decision was clear cut wether to load color or B&W film. Sometimes I would load and shoot both, but the subject had to be something special to merit the extra expense.

The image in question was taken at the Monterey Yacht Harbor on an overcast morning. As I walked up to where the boats were moored looking down into the water were these marvelous wiggly reflections of the sail boats. Seeing there was NO Color in the scene (the overcast made the sky grey) and knowing that a proper exposure for the sky would turn the boats and their rigging black I loaded B&W film into the camera back and had some fun with composition.

So, here’s the B&W image from that morning… 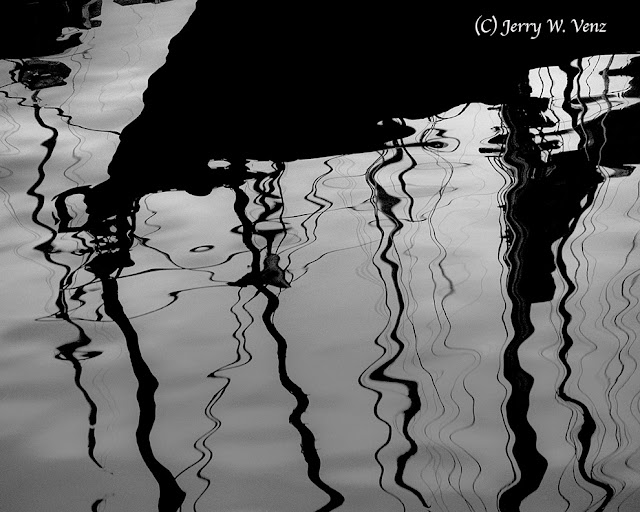 It’s not bad, but it didn’t have the kind of impact I was looking for. You see at that time in 2001 I was heavily involved in annual PPA (Professional Photographers of America) international print competitions and only needed a couple more Merits to earn my Masters Degree.  And, at the top of the list in PPA’s “12-elements for a merit print” is IMPACT. That’s when the idea came to me to digitally convert this into a realistic impactful rendition of…”Red Sky at Morning…Sailor Take Warning; Red Sky at Night…Sailor’s Delight”.  That’s important because a good Title on a PPA competition print can help it’s score.

Here’s the final competition image…
It was a pretty easy job for my lab (Bay Photo Lab) to just layer a sunset gradient OVER my original image, after they had scanned the B&W negative, in Photoshop.

After we got the finished 16x20" competition print back from the lab, I knew I had a winner! I named it “Red Sky at Night…” The last thing I did to make the image “read” better was to invert the image opposite from reality. That was the easiest part—with a physical print, you just turned the print upside-down and draw the “this side up” arrow on the back!

Yes, it all came together and I got the merit I needed at the PPA Western States Convention. In July of 2002 I was awarded my PPA Masters Degree.

Well that’s all for now, should you have questions don’t hesitate to ask.  ’Til Next Week…