Some subjects must be rendered in B&W or Monochrome because they simply lack color to begin with and they have excellent texture as well—such as old barn wood—then it’s a slam dunk. When color helps the center of interest or IS the center of interest than a B&W conversion will probably weaken the image. But, how many colors and where should they be within the frame? I’ve found in my studies of art that simplifying your color composition and placing powerful colors in one of the “crash points” by using “the Rule of Thirds” can make an image very powerful and not overwhelm the viewer. The point is when using color you must design the color composition into the image before you trip the shutter. If that not possible and you have a compelling subject, as in my example below, know that you will have some editing to do in “post”.

My Criteria to Convert Images to Black and White:

My basic philosophy on converting color images to B&W or monochrome has not changed since I was “shooting” film; the best B&W images have:
I think today’s example image meets my criteria….

This image was converted to monochrome using NIK’s Silver Efex Pro-2. NIK is one of my favorite methods of conversion because it offers a lot of choices and styles as well as emulations; and it has 38 preset styles and 18 film emulation modes.

My Process for this image:
Here’s my original color version….

This is a great example of color chaos! With this much uncoordinated color in a scene the viewer’s attention just bounces around all over the frame. In addition his lime green cowboy shirt was just not the classic, old time, cowboy style of image I was looking for!

That’s it for this week…Questions? Don’t hesitate to ask…’Til next week…

A PRO’S TIPS TO PHOTOGRAPHY AT AN OUTDOOR WARBIRD MUSEUM

In last week’s blog I talked about photography at Lockheed’s Blackbird Airpark. So, after we did those incredible planes we walked next door to the Joe Davies Heritage Airpark to find an even more challenging array of all types of military and important civilian aircraft, all jammed together in a fairly small space. Because most of the Warbirds were so close together I moved out to the outer edges of the display to try to isolate some Warbirds and maybe get a clear open background. I was delighted when I found one of their most significant aircraft on display in the outer most ring of the airpark.

In its red, white and blue, stars and stripes paint job I consider this the star of the display at this airpark.  For those unfamiliar with this historical Warbird the Lockheed P-80 Shooting Star was America’s first operational jet fighter and that it was flying in Europe at the height of WWII. Its creation was mandated with the discovery by Allied Intelligence of Germany’s ME 262 jet fighter in the spring of 1943. Tasked with its creation the ultra top secret project was given to the legendary “Kelly” Johnson at Lockheed’s famous “Skunk Works”. Beginning design on June 26th, 1943, the Skunk Works delivered the airframe in an astounding 143 days! The prototype was flying by January 8th, 1944.

Back to photography of this classic Warbird. One of my favorite techniques to isolate a large subject is to use a “foreground foil”. In this case using the small tree and bushes in a little patch of grass creating a dark vignette to frame the aircraft and block some empty sky. This is an example of why I start by viewing my subjects from a distance using more telephoto to look for an alignment of foreground-subject-background.

Again, looking for alignments and foregrounds….

This shows just how densely packed the aircraft are in this airpark. There are wings and tails overlapping and nearly touching. So, for this image I “placed” the colorfully striped jet (with camera position and focal length) under the tail of the jet in the foreground.

For this image of the Lockheed F104 “Star fighter” I moved to a rear angle to place the jet against that tree in the background, giving it a dark field for nice contrast between the jet and the tree; eliminating an empty bright sky. In camera tight framing eliminated side distractions.

Then sometimes you can just fill the frame with two really big planes….

Wow, a B-52 bomber with a 747 in the background. And not just any 747 that’s one of the space shuttle carriers. Aside from close-in photography with my lens at 24mm what really made this image clean was that the large expanse of dirt in this airpark is so smooth and clean. They obviously take care of the grounds there.

Then moving around to inspect the 747….

In awe of the size of the 747 I walked past this until my son, Alex, told me to look closely above the landing gear. Happily perched at the edge of the landing gear well was this owl that had made a nest there!

Something about “birds of a feather!”…comes to mind, but it really doesn’t apply here!

A PRO’S TIPS TO PHOTOGRAPHY AT LOCKHEED’S BLACKBIRD AIRPARK

The biggest problem photographing aircraft at any museum is isolating particular planes for a clean, uncluttered, image. Indoor museums are the worst because in that confined space you have to deal with a ceiling, walls, and often poor light. So, my preference is doing photography of aircraft at airshows or in this case the outdoor museum at Lockheed’s Blackbird Airpark in Palmdale, California, and the Joe Davies Heritage Airpark right next door.

The Blackbird airpark gives photographers good access to an SR-71A an A12 and a U-2. There’s also one of the J58 jet engines that powered the SR-71 and one of the D-21 supersonic reconnaissance drones.  We first heard about the Blackbird Airpark from our son who lives in Palmdale with his wife who is an engineer employed at the famous Lockheed Skunk Works; the top secret unit under the legendary Kelly Johnson that designed and built the famous SR-71 and the U-2 spy planes among other things! So, when we visited them last year they drove us over to see Plant 42, which houses the skunk works at site 10, with the Blackbird Airpark near by.

Here’s my isolation of the SR-71A…

The first step was framing the Blackbird in tight; filling the frame and omitting its surroundings. The second step was in “post” with NIK’s Silver Efex Pro2 using their Antique Plate-2, which created a high contrast B&W effect and a white vignette that clearly isolated the jet engine nacelles from the dark background as seen in the original image here…

The original image has a lot of dark ground clutter that hid the plane’s details. I don’t think the color version here was helping either; after all the SR-71 is a mostly monochrome subject.

How about a foreground blocking isolation…

Ducking under the wing of the SR-71 for a tight view of the nearby A-12 created a nice composition and showed some interesting detail on the underside of the SR-71’s wing. This “foreground blocking” technique was mostly an effort to block out a sky with a lot of power poles and high-tension power lines messing up the scene. The unexpected bonus was the nice curving shape (and that detail) of the underside of the SR-71’s wing.

And a “powerful” detail image…
With one of its huge Pratt & Whitney J58 jet engines in the background and where it’s supposed to be, as the foreground center-of-interest, I like the storytelling juxtaposition of elements in this image.

Backing off and going to telephoto for some compression of the plane and engine nacelle…. This thing looks like some bizarre hydroplane! Its unique “chined” fuselage looks like the hull of a hydro racing boat.

The SR-71 still looks futuristic even though it was designed in 1959; truly remarkable.

In next week’s Blog we’ll walk next door to the Jose Davies Heritage Airpark.  As usual should you have questions don’t hesitate to ask…

We enjoy helping our clients celebrate their milestones. One of the common milestones is when they finally lose the weight they say they’ve always wanted to lose. I can’t tell you how many times I’ve had a potential customer say, “Oh, I know I need an updated portrait…but, I just have to lose a few pounds first—then I’ll call you!” Years go by and most never make that appointment. Sadly their procrastination sometimes means that they don’t commit to their own family portrait or even worse the large multi-generational group portraits (with their brothers and sisters families and the grand parents) that actually create the milestones of family history (“before it’s too late”).

Our solution to this procrastination—when the weight loss they seek is not so much—is to go ahead with the family portrait and have us trim them down with a little digital magic. Then they will have a preview (an image goal!) of the body they want. We do this kind of thing all the time.
And, somethings we get that call when the client finally achieves their goal….

This is Ed, and he lost over 90 pounds and got really fit as well. So, when he told us he rewarded himself with that motorcycle we all agreed it had to be included to really personalize his portrait. And, besides look how comfortable Ed looks astride that Harley! 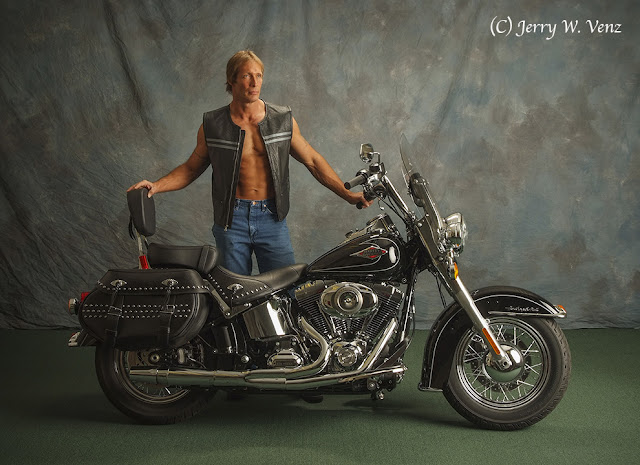 This was the first large subject we photographed in our Eagle Studio. Doing a side view of a big bike was never possible in our previous studio, as our backgrounds at 10 feet wide were never wide enough. However, in the Eagle studio we were able to mount our 10x20’ backgrounds sideways giving us the 20 foot background needed to do this.

In addition we upgraded our studio lighting with a 7-foot Octodome (Photoflex) main light that will cover large objects or groups without the need for a fill light. By omitting the traditional fill light our lighting is more directional giving our images a nice three dimensional, dramatic, look.